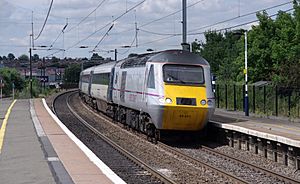 East Coast was a government-owned British train operating company. It ran high-speed passenger trains on the East Coast Main Line between London, Yorkshire, the North East and Scotland, being forced to take over after National Express East Coast defaulted on their franchise. It started operations on 14 November 2009. It ended operations on 28 February 2015. They had 45 locomotives and served 53 stations whilst operating 12 of them. The franchise was re-let to Virgin Trains East Coast, ending the period of government ownership, despite contributing a lot of money to the Treasury and calls for the government to retain the franchise.

East Coast paid back over £1 billion to the government over the course of its franchise, more than twice as much as rival Virgin Trains did in the same time period on the West Coast Main Line. However, it used relatively old trains and therefore had much lower leasing costs, as in 2012/13 Virgin paid £302 million for its fleet of trains, while East Coast paid £53 million.

All content from Kiddle encyclopedia articles (including the article images and facts) can be freely used under Attribution-ShareAlike license, unless stated otherwise. Cite this article:
East Coast (train company) Facts for Kids. Kiddle Encyclopedia.