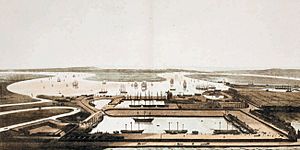 The East India Docks were a group of docks in Blackwall, East London, England, north-east of the Isle of Dogs. Today only the entrance basin and the perimeter wall are still visible.

Following the successful creation of the West India Docks, which opened in 1802, an Act of Parliament in 1803 set up The East India Dock Company, promoted by the British East India Company.

All content from Kiddle encyclopedia articles (including the article images and facts) can be freely used under Attribution-ShareAlike license, unless stated otherwise. Cite this article:
East India Docks Facts for Kids. Kiddle Encyclopedia.