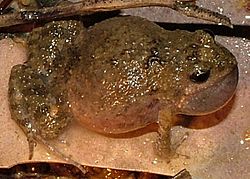 As with all species within the genus Crinia, the eastern sign-bearing froglet is a small ground dwelling frog; reaching a length of 2.3 centimetres (0.91 in). It is highly variable in colour and markings, with some specimens being smooth skinned, and others having skin folds and warts on their dorsal surface.

The ventral surface is dark grey, and marbled in white of varying density. Due to the high variability in appearance, the eastern sign-bearing froglet cannot be distinguished from the common eastern froglet (Crinia signifera) and Sloane's froglet (Crinia sloanei) by dorsal appearance, however, advertisement call and belly colouration can be used to separate the species.

The eastern sign-bearing froglet habits swamps and ponds, and is often found under debris at the edge. The male calls from the edge of the pond; the call is a series of low squelching sounds, repeated every few seconds. Amplexus takes place at the edge of the breeding sites; eggs are laid in ponds singularly in shallow water.

All content from Kiddle encyclopedia articles (including the article images and facts) can be freely used under Attribution-ShareAlike license, unless stated otherwise. Cite this article:
Eastern sign-bearing froglet Facts for Kids. Kiddle Encyclopedia.