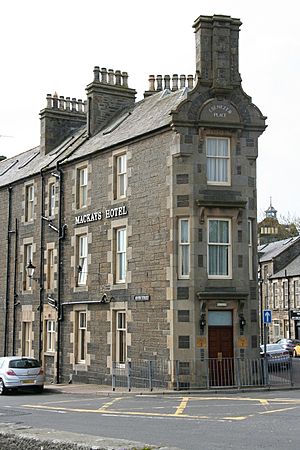 Ebenezer Place, in Wick, Caithness, Scotland, is credited by the Guinness Book of Records as being the world's shortest street at 2.06 m (6 ft 9 in).

In 2006 it surpassed the previous record (5.2 m or 17 ft) set by Elgin Street, Bacup, Lancashire. The street has only one address: the front door of No. 1 Bistro, which is part of Mackays Hotel.

The street originated in 1883, when 1 Ebenezer Place was constructed; the owner of the building, a hotel at the time, was instructed to paint a name on the shortest side of the hotel. It was officially declared a street in 1887.

But for its status as a street in its own right, the location of Ebenezer Place would be a junction of Union Street with River Street.

All content from Kiddle encyclopedia articles (including the article images and facts) can be freely used under Attribution-ShareAlike license, unless stated otherwise. Cite this article:
Ebenezer Place, Wick Facts for Kids. Kiddle Encyclopedia.