Eclipse is a brand of chewing gum and breath mint, first introduced in the U.S. by the Wrigley Company in 1999 as its first entrant into the pellet gum segment. However, it was modeled after Excel in Canada, which was launched in 1991, eight years before Eclipse was launched. 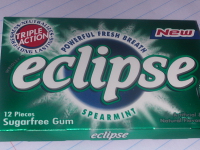 Eclipse is a brand that promises to give users "powerful fresh breath". It comes in blister packs of 12, the Big-E-Pak – 60 count plastic container of candy-coated pellets, and the recently added split packs that include 18 pellets. Eclipse gum is available in the U.S, Australia and Latvia, but are also sold in Canada under the name Excel.

Mints, in metal and paper (Europe) containers, are also sold by Wrigley under the Eclipse brand, as is Eclipse Ice gum.

In late 2007, the American Dental Association awarded its seal of approval to Eclipse sugarfree gum. Orbit and Extra, two other chewing gum products from the same company, also bear the ADA seal.

An Eclipse mint is an oval prism rounded at top and bottom, with the top and bottom halves varying in colour, depending on the flavor. Spearmint (green), peppermint and Black Chill (blue), and Winterfrost (dark blue) are available, as well as cinnamon (all pink), orange (light orange) and blackcurrant (purple).

All the eclipse flavors lined up: orange, cinnamon, blackcurrant, winterfrost, peppermint, and spearmint

Though classified as breath mints, it is unknown if the mints contain active antibacterial ingredients. The new packaging now claims to have a 'natural ingredient' that is scientifically proven to help kill the germs that cause bad breath. Such ingredient is not specified but the label points to a pending patent for this ingredient. Wrigley's product website for Eclipse describes the ingredient as Magnolia bark extract (MBE), which has its origins in traditional Chinese medicine. In lab tests, MBE is said to have killed almost all oral bacteria, including the types that cause bad breath and cavities. Eclipse is the first product in the US to contain MBE.

Eclipse mints are packaged in a recyclable steel box. The top of the box (narrow end) is attached with metal hinge (a true hinge, not a living hinge like many boxed mints). The top may be opened and pushed back on the hinge to gain access to the mints. On opening the box the tagline "powerful fresh breath" is revealed, printed on a raised metal plate on the inner surface of the lid.

50 mints are contained in each package, with a net weight of 1.2 oz (34 g). The Canadian version only has 49 mints. In Australia the packaging has changed [ March 2019] to 17 g, but the price has remained at $2 that the original packaging was at when on special at Woolworths.

The Australian and New Zealand products contains a French translation on the outer wrapper, even though it is not an official language of either country.

The winterfrost variety is not sold in Australia. Cinnamon has been discontinued due to very low sales, but are still available in many stores. In early 2009, the "Black Chill" variety was introduced. This variety comes in a black tin, and the mints are the same colour as the Peppermint variety. The taste is comparable to Wintergreen Tic Tacs. In late 2009 a new flavor was introduced, Cool Breeze. They are a less intense peppermint flavor and appear in a silver tin.

In Canada, Excel Mints are sold with both French and English on the box, as required by law.

All content from Kiddle encyclopedia articles (including the article images and facts) can be freely used under Attribution-ShareAlike license, unless stated otherwise. Cite this article:
Eclipse (breath freshener) Facts for Kids. Kiddle Encyclopedia.