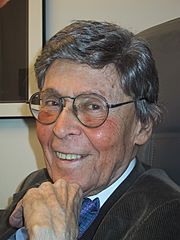 Evia was born on July 30, 1910 in Mérida, Yucatán. His father was Mexican, and his mother was French. In 1912, his family immigrated to New York City. He studied at The Dalton School 1931. Evia was partners with Robert Denning from the 1950s until the 1960s. Then he was partners with David McJonathan-Swarm from 1966 until his death in 2003. Evia died in New York City, New York on February 10, 2003 from pneumonia after a broken hip, aged 92.

All content from Kiddle encyclopedia articles (including the article images and facts) can be freely used under Attribution-ShareAlike license, unless stated otherwise. Cite this article:
Edgar de Evia Facts for Kids. Kiddle Encyclopedia.