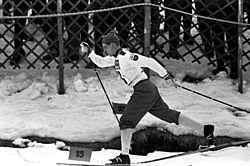 Eero Mäntyranta in the 1964 Winter Olympics.

Eero Antero Mäntyranta (20 November 1937 – 30 December 2013) was a Finnish skier. He has won several medals and the Winter Olympic Games.

Mäntyranta was born in Pello, Finland.

He competed in four Winter Olympics from 1960 to 1972. He won seven medals at the first three of them. This makes him one of the most successful skiers in Finland. His success at the 1964 Winter Olympics earned him the nickname "Mister Seefeld". The Finnish Ministry of Education honored him with the Pro Urheilu letter of recognition in 2000. There is a museum called Mäntyranta in Pello.

All content from Kiddle encyclopedia articles (including the article images and facts) can be freely used under Attribution-ShareAlike license, unless stated otherwise. Cite this article:
Eero Mäntyranta Facts for Kids. Kiddle Encyclopedia.