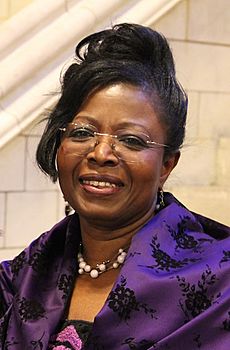 Efua Dorkenoo, OBE (6 September 1949 – October 2014) was a Ghanaian campaigner against female genital mutilation (FGM). She was Programme Director of 'The Girl Generation: Together To End FGM' and Senior FGM Advisor for Equality Now, an international human rights organisation.

She was one of the founders in 1983 of the Foundation for Women's Health, Research and Development (FORWARD). It is a British charity that supports women who have experienced FGM.

Dorkenoo died of cancer at the age of 65 in London.

All content from Kiddle encyclopedia articles (including the article images and facts) can be freely used under Attribution-ShareAlike license, unless stated otherwise. Cite this article:
Efua Dorkenoo Facts for Kids. Kiddle Encyclopedia.