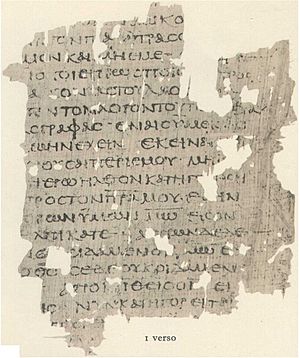 Part of the papyrus

The Egerton Gospel is a set of papyri that are now in the British Museum. The papyri have been dated to the second century. The text they contain may have been written 50-100 AD. It is one of the oldest known fragments of any gospel, or any codex. Soon after the British Museum acquired it in the summer of 1934, it was printed in 1935. It is also called the Unknown Gospel, as no ancient source makes reference to it, in addition to being entirely unknown before its publication.

The surviving fragments include four stories:

The last story has no equivalent in canonical Gospels:

All content from Kiddle encyclopedia articles (including the article images and facts) can be freely used under Attribution-ShareAlike license, unless stated otherwise. Cite this article:
Egerton Gospel Facts for Kids. Kiddle Encyclopedia.