Egg and chips facts for kids 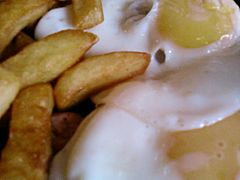 Egg and chips, also known as chips and egg is a popular dish in the United Kingdom, consisting simply of chips served with fried eggs.

Egg and chips became popular in Britain during World War I due to a shortage of meat. It was a favourite food of Tommies behind the lines on the Western Front in northern France and Belgium, eaten at makeshift shops called "estaminet" alongside cheap wine and beer.

Egg and chips is associated with a working-class diet. In an article on moving from the working class to the middle class, a British journalist recounted that "There are things I grew up with that I still love—pub life, darts, egg and chips". Jack Charlton, after playing in the World Cup-winning England football team in 1966, remarked: "We stopped the car for egg and chips in a transport cafe. We'd eaten nothing but the best food for weeks and I was dying for some ordinary grub." The image of British people insisting on ordering egg and chips while on holiday abroad has also been used as a stereotype.

In a study on the perceptions of social inequality of people in North West England, "Beer, fags, egg and chips" was highlighted by the researchers as an example of individual behaviour thought to be connected to poor health.

All content from Kiddle encyclopedia articles (including the article images and facts) can be freely used under Attribution-ShareAlike license, unless stated otherwise. Cite this article:
Egg and chips Facts for Kids. Kiddle Encyclopedia.