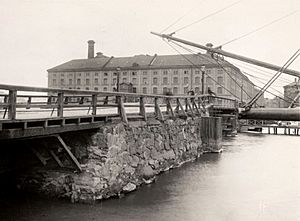 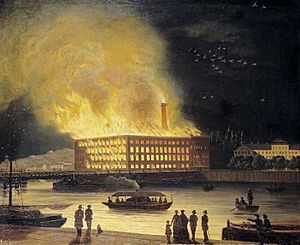 Eldkvarn was a gristmill in central Stockholm in Sweden, that was destroyed by a fire on 31 October 1878. In its place today is the Stockholm City Hall. The mill was built in 1805 for Abraham Niclas Edelcrantz with a steam engine built by Samuel Owen.

All content from Kiddle encyclopedia articles (including the article images and facts) can be freely used under Attribution-ShareAlike license, unless stated otherwise. Cite this article:
Eldkvarn Facts for Kids. Kiddle Encyclopedia.