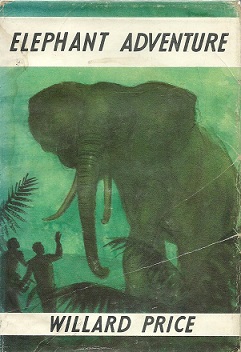 Elephant Adventure is a 1964 children's book by the Canadian-born American author Willard Price featuring his "Adventure" series characters, Hal and Roger Hunt. It is set in the Mountains of the Moon in Uganda and depicts Hal and Roger's attempts to capture elephants for a zoo.

Their enemies are a group of slave hunters. They kidnapped some villagers and cut an elephant's trunk when the animal resisted their capture. (Hal had to shoot the elephant, much to Roger's protest. Hal explained that they were in the jungle and no one could save the trunk. An elephant will die without a trunk). Hal and Roger and their team followed the slave hunters and were captured.

All content from Kiddle encyclopedia articles (including the article images and facts) can be freely used under Attribution-ShareAlike license, unless stated otherwise. Cite this article:
Elephant Adventure Facts for Kids. Kiddle Encyclopedia.