Eliad Nachum was born in Bat Yam, to Israeli parents of Sephardic Jewish (Iraqi-Jewish and Turkish-Jewish) descent. He studied in the Orat Ramat Yossef junior high school, and in the music class of the Ramot high school in Bat Yam. In 2008 he enlisted in the IDF and served as a singer in the band of Education and Youth Corps. Parallel to his service, he worked on a debut album with the record producers TripL.

In 1997 Eliad started to participate in the successful series "Shemesh" as Bar.

In 1998 he acted in the movie Ben-Gurion and dubbed on Popeye and Son. 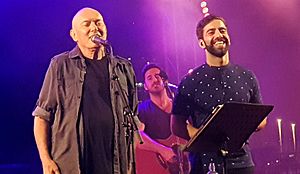 In 2011 he released with TripL band his first single, "Moving", from their debut album "Ready, Set, Pop". the single included on the international collection "Boiling Music".

In 2014 he released as singles the songs "Miklat", "Hofshi" and "Siman", that written by Nachum with the Israeli rapper Ron Nesher, the songs included on his debut album "Siman".

On September 10, 2016 he elected for the Breakout of The Year and Song of The Year with the song "Matok Kshemarly" at the yearly chart of Galgalatz of 5775 AM.

All content from Kiddle encyclopedia articles (including the article images and facts) can be freely used under Attribution-ShareAlike license, unless stated otherwise. Cite this article:
Eliad Nachum Facts for Kids. Kiddle Encyclopedia.