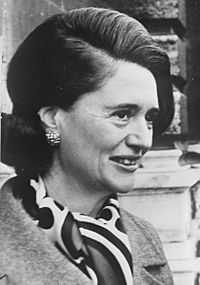 Elisabeth "Sissy" Waldheim (née Ritschel; 13 April 1922 – 28 February 2017) was an Austrian businesswoman. She was the wife of Kurt Waldheim, the United Nations Secretary-General and President of Austria. She was the First Lady of Austria from 1986 to 1992. She applied for Nazi Party membership as soon as she was old enough, and was accepted in 1941". She was born in Vienna.

All content from Kiddle encyclopedia articles (including the article images and facts) can be freely used under Attribution-ShareAlike license, unless stated otherwise. Cite this article:
Elisabeth Waldheim Facts for Kids. Kiddle Encyclopedia.