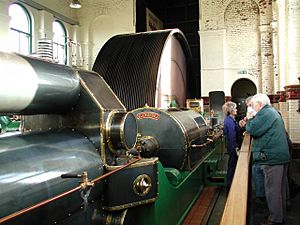 Alexandra, one of the twin preserved steam engines showing the rope drive flywheel

At 3000 hp, the twin tandem compound steam engine is possibly the most powerful of the type in preservation. The two engines are named Victoria and Alexandra, multiple ropes around the flywheel drove the line shafts on each floor of the mill which in turn drove the ring spinning frames.

In addition to the mill engine, the museum also houses in operational condition the original Ellenroad mill pilot generator engine and sprinkler pump, the Whitelees Beam Engine, and the Irene Engine. The museum trust also owns the surviving components of the Fern Mill Engine, which it hopes eventually to restore to working condition.

All content from Kiddle encyclopedia articles (including the article images and facts) can be freely used under Attribution-ShareAlike license, unless stated otherwise. Cite this article:
Ellenroad Ring Mill Engine Facts for Kids. Kiddle Encyclopedia.