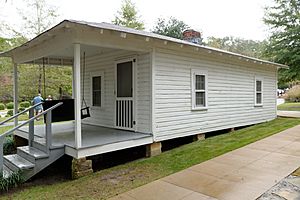 The museum site includes the birthplace home of Elvis Presley, a museum, a chapel, and the Assembly of God Church building where the Presley family worshipped. Financially, times were hard on Vernon and Gladys, and they had to move out of the shotgun house when Elvis was only a few years old for lack of payment. Vernon and Gladys worked various jobs while in Tupelo and moved several different times during the thirteen years they resided in Mississippi.

An F5 tornado struck eight miles outside the city on April 5, 1936. The one-year-old Elvis and his parents survived the storm because it did not destroy their house.

All content from Kiddle encyclopedia articles (including the article images and facts) can be freely used under Attribution-ShareAlike license, unless stated otherwise. Cite this article:
Elvis Presley Birthplace Facts for Kids. Kiddle Encyclopedia.