Tupelo is the county seat and the largest city of Lee County, Mississippi. The seventh-largest city in the state, it is situated in Northeast Mississippi, between Memphis, Tennessee, and Birmingham, Alabama. It is accessed by Interstate 22. As of the 2010 census, the population was 34,546, with the surrounding counties of Lee, Pontotoc and Itawamba supporting a population of 139,671

Tupelo was the first city to gain an electrical power grid under President Franklin D. Roosevelt's program of the Tennessee Valley Authority construction of facilities during the Great Depression. The city is also the birthplace of singer Elvis Presley.

Indigenous peoples lived in the area for thousands of years. The historic Chickasaw and Choctaw, both Muskogean-speaking peoples of the Southeast, occupied this area long before European encounter.

French and British colonists traded with these indigenous peoples and tried to make alliances with them. The French established towns in Mississippi mostly on the Gulf Coast. At times, the European powers came into armed conflict. On May 26, 1736 the Battle of Ackia was fought near the site of the present Tupelo; British and Chickasaw soldiers repelled a French and Choctaw attack on the then-Chickasaw village of Ackia. The French, under Louisiana governor Jean Baptiste Le Moyne, Sieur de Bienville, had sought to link Louisiana with Acadia and the other northern colonies of New France.

In the early 19th century, after years of trading and encroachment by European-American settlers from the United States, conflicts increased as the US settlers tried to gain land from these nations. In 1830 Congress passed the Indian Removal Act and authorized the relocation of all the Southeast Native Americans west of the Mississippi River, which was completed by the end of the 1830s.

In the early years of settlement, European-Americans named this town Gum Pond, supposedly due to its numerous tupelo trees, known locally as blackgum. The city still hosts the annual Gumtree Arts Festival.

During the Civil War, Union and Confederate forces fought in the area in 1864 in the Battle of Tupelo. Designated the Tupelo National Battlefield, the war site is administered by the National Park Service (NPS). In addition, the Brices Cross Roads National Battlefield, about ten miles north, commemorates another Civil War site.

After the war, a cross-state railroad for northern Mississippi was constructed through the town, which encouraged industry and growth. With expansion, the town changed its name to Tupelo, in honor of the battle. It was incorporated in 1870. 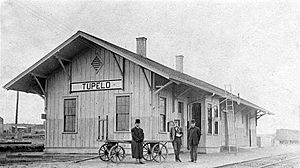 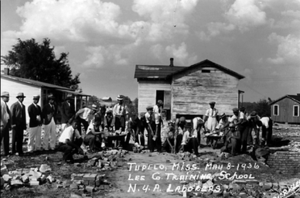 Students clear the ruins of the segregated Lee County Training School, a month after the 1936 tornado

By the early twentieth century, the town had become a site of cotton textile mills, which provided new jobs for residents of the rural area. Under the state's segregation practices, the mills employed only white adults and children. Reformers documented the child workers and attempted to protect them through labor laws.

The last known bank robbery by Machine Gun Kelly, a Prohibition-era gangster, took place on November 30, 1932 at the Citizen’s State Bank in Tupelo; his gang netted $38,000. After the robbery, the bank’s chief teller said of Kelly, “He was the kind of guy that, if you looked at him, you would never thought he was a bank robber.”

During the Great Depression, Tupelo was electrified by the new Tennessee Valley Authority, which had constructed dams and power plants throughout the region to generate hydroelectric power for the large, rural area. The distribution infrastructure was built with federal assistance as well, employing many local workers. In 1935, President Franklin Roosevelt visited this "First TVA City".

In 2007, the nearby village of Blue Springs was selected as the site for Toyota's eleventh automobile manufacturing plant in the United States.

In 2013 Gale Stauffer of the Tupelo Police Department died in a shootout following a bank robbery, possibly the first officer killed in the line of duty in the Department's history.

The spring of 1936 brought Tupelo one of its worst-ever natural disasters, part of the Tupelo-Gainesville tornado outbreak of April 5–6 in that year. The storm leveled 48 city blocks and over 200 homes, killing 216 people and injuring more than 700 persons. It struck at night, destroying large residential areas on the city's north side. Among the survivors was Elvis Presley, then a baby. Obliterating the Gum Pond neighborhood, the tornado dropped most of the victims' bodies in the pond. The storm has since been rated F5 on the modern Fujita scale. The Tupelo Tornado is recognized as one of the deadliest in U.S. history.

The Mississippi State Geologist estimated a final death toll of 233 persons, but 100 whites were still reported as hospitalized at the time. Because the white newspapers did not publish news about blacks until the 1940s and 1950s, historians have had difficulty learning the fates of blacks injured in the tornado. Based on this, historians now estimate the death toll was higher than in official records. Fire broke out at the segregated Lee County Training School, which was destroyed. Its bricks were salvaged for other uses.

The area is subject to tornadoes. In 2008 one rated an EF3 on the Enhanced Fujita Scale struck the town. On April 28, 2014, a large tornado struck Tupelo and the surrounding communities, causing significant damage.

Tupelo has a humid subtropical climate (Cfa in the Köppen climate classification). Winters are short but cool, with sometimes-dramatic temperature swings. The warmest winter days can have high temperatures from 70 to 80 °F (21.1 to 26.7 °C) and low temperatures from 50 to 60 °F (10.0 to 15.6 °C). The coldest winter days usually have high temperatures below freezing (32 °F or 0 °C), and on rare occasions in the 20s Fahrenheit, with low temperatures near or below 12 °F or −11.1 °C and occasional lows in the single digits Fahrenheit or (rarely) lower still. In January, the coldest month, Tupelo’s average high temperature is near 50 °F or 10 °C and the average low about 30 °F or −1.1 °C. Day-to-day temperature variations are far less in the consistently hot and humid summer months. July and August high temperatures average near 90 °F or 32.2 °C, with low temperatures near 70 °F or 21.1 °C, with consistently high humidity and occasional thunderstorms, decreasing in frequency and intensity after June. The spring and fall months have generally pleasant temperatures, with average daily highs in the 70s Fahrenheit in April and October, but with shower and thunderstorm activity markedly more frequent, intense and severe from March to May, when severe thunderstorms and occasional tornadoes are significant threats.

Tupelo has an average annual precipitation of over 55 inches or 1,397.0 millimetres per year – virtually the highest found anywhere in the eastern U.S. outside isolated highland areas and the immediate Gulf Coast (i.e. New Orleans, LA and Pensacola, FL areas), with their heavier summer-season rainfalls. Tupelo’s average annual precipitation cycle demonstrates an unusual pattern for humid-subtropical climates worldwide. Many humid-subtropical areas (like the Shanghai, China area and the U.S. southeast Atlantic coast, i.e. Norfolk, VA; Cape Hatteras, NC; Charleston, SC; Savannah, GA) have highest monthly average precipitation amounts in July or August. In contrast, Tupelo has a prolonged "wetter season" from November to June, and a marked tendency toward drier conditions from late July through October. In terms of average monthly precipitation, Tupelo’s single wettest month is March, averaging 6.3 inches or 160.0 millimetres, with December a close second at 6.1 inches or 154.9 millimetres (for both, virtually the highest average found anywhere in the United States outside windward areas west of the Cascade Range and spotty highland areas). Spring (March to May) and to a lesser extent late fall/early winter (November-December) can be especially turbulent, with heavy-rain events and strong to occasionally violent showers and thunderstorms not uncommon. Tupelo lies near the heart of Dixie Alley, an area of the U.S. mid-South with a relatively high frequency of severe thunderstorms and tornadoes. As elsewhere in Dixie Alley, the primary severe-weather season in Tupelo begins in late February, continuing into May, with a secondary “severe weather” peak in November–December. For example, Tupelo was hit hard by tornadoes in April 1936, and again in April 2014 (see “Severe Weather” section, above).

The median income for a household in the city is $39,415. The poverty rate for people living below the poverty line is 20%. 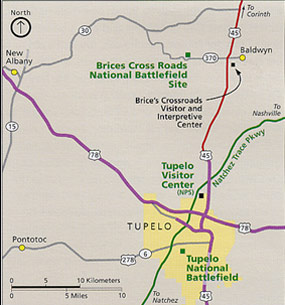 All content from Kiddle encyclopedia articles (including the article images and facts) can be freely used under Attribution-ShareAlike license, unless stated otherwise. Cite this article:
Tupelo, Mississippi Facts for Kids. Kiddle Encyclopedia.