A Chromebook is a personal computer running Chrome OS as its operating system. The devices are designed to be used while connected to the Internet and support applications that reside on the Web, rather than traditional applications that reside on the machine itself. All the data is stored in the "cloud" accessed by an internet connection. A Chromebook is an example of a thin client.

The first Chromebooks for sale, by Acer Inc. and Samsung, were announced at the Google I/O conference in May 2011 and began shipping on June 15, 2011. Lenovo, Hewlett Packard and Google itself entered the market in early 2013. In addition to laptop models, a desktop version, called a Chromebox, was introduced in May 2012.

Chromebooks are primarily sold online, both directly from Google and from the company's retail partners. By 2012, schools had become the largest category of customer. 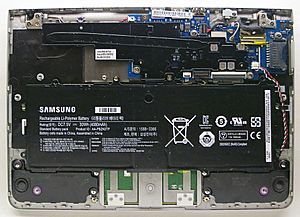 Chromebooks are shipped with Google Chrome OS, an operating system that uses the Linux kernel and the Google Chrome web browser with an integrated media player.

Chromebooks are primarily designed to be used connected to the Internet. Instead of installing traditional applications such as word processing and instant messaging, users add web apps from the Chrome Web Store. Google claims that a multi-layer security architecture eliminates the need for anti-virus software.

Support for many USB devices such as cameras, mice, external keyboards and flash drives is included, utilizing a feature similar to plug-and-play on other operating systems.

While Chromebooks are designed to be used when connected to the Internet, users are able to access various Google applications offline.

All content from Kiddle encyclopedia articles (including the article images and facts) can be freely used under Attribution-ShareAlike license, unless stated otherwise. Cite this article:
Chromebook Facts for Kids. Kiddle Encyclopedia.