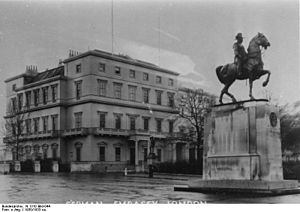 The Prussian Consul-General was housed at 9 Carlton House Terrace in the so-called Prussia House. After World War II Prussia House was requisitioned as enemy property and the Federal Republic of Germany moved its consulate and diplomatic operations to Belgrave Square, still operating as a Consulate General. The Consulate became a fully functional Embassy in June 1951, the FRG leasing the building for 99 years in 1953.

In the 1970s, office space in the embassy was tight so an extension was erected at Chesham Place, inaugurated in 1978. It won the Westminster City Council prize for architecture.

Delegates of states of the Holy Roman Empire

Electorate of the Palatinate

All content from Kiddle encyclopedia articles (including the article images and facts) can be freely used under Attribution-ShareAlike license, unless stated otherwise. Cite this article:
Embassy of Germany, London Facts for Kids. Kiddle Encyclopedia.