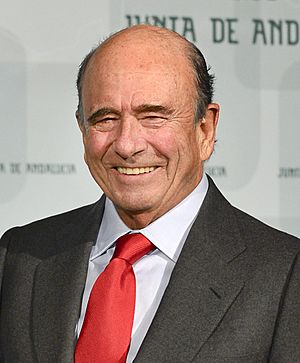 Emilio Botín-Sanz de Sautuola y García de los Ríos Marquis Consort of O'Shea (1 October 1934 – 10 September 2014) was a Spanish banker and businessman. He was the Executive Chairman of Grupo Santander until his death. The bank is the largest in the Eurozone. He was a billionaire.

Botín was born in Santander, Cantabria. He was married to Spanish nobility Paloma O'Shea, giving Botín an extended title. They had six children: Ana, Carmen, Carolina, Paloma, Javier and Emilio. He was a Roman Catholic.

Botín died from a heart attack on 10 September 2014 in Madrid. He was 79. His eldest daughter Ana now has his job as Chair of Santander.

All content from Kiddle encyclopedia articles (including the article images and facts) can be freely used under Attribution-ShareAlike license, unless stated otherwise. Cite this article:
Emilio Botín Facts for Kids. Kiddle Encyclopedia.