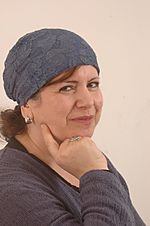 Emuna Elon was born in 1955 in Jerusalem, the daughter of rabbi and professor Pinchas Hacohen Peli and his wife Pnina. She was raised in Jerusalem and New York, lived for many years in the Israeli settlement of Beit El, and currently lives in Jerusalem. She was married to the late Rabbi Binyamin Elon, a former Knesset member, and is the mother of six children. The name Emuna means faith.

From 1991 to 2005, she wrote a column in Yedioth Ahronoth, Israel's largest newspaper, where she advocated the separation of Judaism and politics.

All content from Kiddle encyclopedia articles (including the article images and facts) can be freely used under Attribution-ShareAlike license, unless stated otherwise. Cite this article:
Emuna Elon Facts for Kids. Kiddle Encyclopedia.