According to the tour operators, the cave was discovered by two boys in October 1879, while hunting rabbits on the property of Ruben Zirkle. The boys cornered a rabbit behind an outcropping of limestone rocks, and began moving some of the loose stones to flush the rabbit from his hiding place. After doing this they discovered a hole in the ground and ran back to the house to grab some ropes and candles. After going into the hole the boys found that there were many chambers and rooms. Not long after the discovery, the Zirkles began doing candle lit tours through the cave. In 1919, the cave was bought by Colonel Brown who had the cave fully electrified for the August 1920 grand opening with a lighting design by Phinheas Stephens. In 1928 more electric work was done in collaboration with Samuel Hibben and W.A. Oglesby. There is a campground site with hookups for recreational vehicles at Endless Caverns. 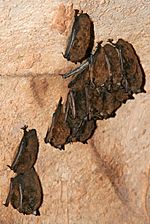 Endless is home to colonies of bats, primarily little brown bats, that are visible on the tour route.

The present mapped extent of Endless Caverns is 5.5 miles (8.9 km), making it the 20th longest cave in Virginia and the 176th longest in the United States. Its deepest measured point is 160 feet (49 m) below the surface.

All content from Kiddle encyclopedia articles (including the article images and facts) can be freely used under Attribution-ShareAlike license, unless stated otherwise. Cite this article:
Endless Caverns Facts for Kids. Kiddle Encyclopedia.