Notable contributing buildings in the district include: 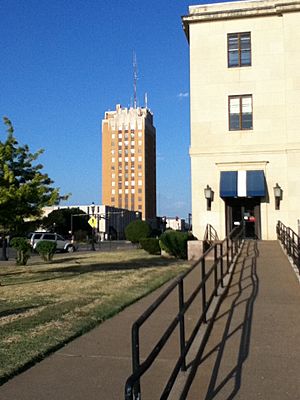 The United States Post Office and Courthouse in Enid, Oklahoma with the Broadway Tower in the background. 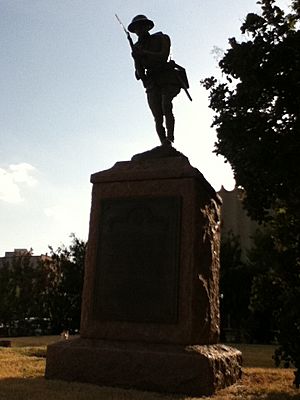 Doughboy statue on the courthouse lawn.

Two statues are on the square also are contributing:

He was then followed by others, including Albert Hammer, Ben F. Clampitt, and William Coyle. 300 squatters also soon occupied the land, calling it Jonesville, and platted the site as a separate town. Jonesville was bordered by Grand on the west, 7th Street on the east, Walnut street on the north, and Randolph on the south which joined with the town square. The portion of Jonesville included in the Historic District is along East and West Randolph, north of the square. The property was estimated to be worth at least one million dollars in 1903.

C.M. Hobbs, Eugene Kenyon and Peter Bowers made up the trust for the Jonesville group. Clampitt, Coyle, and Hammer agreed to forfeit their claim in favor of a portion of the property if Cook lost his bid. Cook built a house on his property, but the land was also occupied by the houses of several squatters. Mr. Cook left Enid, put his house up for mortgage in order to pay the dispute's legal fees. Ultimately, he left for six months, seeking assistance from the Chickashaw Nation. He soon became ill with pneumonia, and came back to Enid, only to find his house demolished and his land overtaken by the squatters. As a result of his leaving town, the Department of the Interior judged that Cook had abandoned his claim, and the Jonesville party won. On March 6, 1895, the Jonesville citizens requested to be annexed by Enid. Enid City Ordinance No. 57, passed April 3, 1895 allowed Enid to annex Jonesville.

In 1898, at the age of 26, Cook became a Rough Rider in Cuba, as part of troop D. He toured with a wild west show, married, had children, and opened a steakhouse. Ultimately, Cook became a bootlegger when Oklahoma instituted prohibition in 1907, often going in and out of jail. Cook died in 1936.

All content from Kiddle encyclopedia articles (including the article images and facts) can be freely used under Attribution-ShareAlike license, unless stated otherwise. Cite this article:
Enid Downtown Historic District Facts for Kids. Kiddle Encyclopedia.