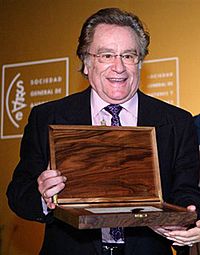 He played the role of Caramello in Carnival in Venice. He also played Cardona in Doña Francisquita, Governor in Don Gil de Alcalá, Espejo in Chorizos y Poles, Españita and Ansúrez in different productions of La patria chica, Atenedoro in La revoltosa and Intendente in El rey que rabió.

On 5 March 2020, Portal suffered a fall at his home in Madrid. He was unable to be hospitalized due to the coronavirus pandemic. His health got worse and died on 20 March from gastroenteritis, aged 87.

All content from Kiddle encyclopedia articles (including the article images and facts) can be freely used under Attribution-ShareAlike license, unless stated otherwise. Cite this article:
Enrique del Portal Facts for Kids. Kiddle Encyclopedia.