Born into a musical family and raised in the Irish-speaking area of Gweedore in County Donegal, she grew up speaking the Irish language, and did not speak English until she attended primary school.

Enya began her music career when she joined her family's Celtic folk band Clannad in 1980 on keyboards and backing vocals. She left in 1982 with their manager and producer Nicky Ryan to pursue a solo career, with Ryan's wife Roma Ryan as her lyricist. Enya developed her sound over the following four years with multitracked vocals and keyboards with elements of new age, Celtic, classical, church, and folk music. She has sung in ten languages.

Enya's first projects as a solo artist included soundtrack work for The Frog Prince (1984) and the 1987 BBC documentary series The Celts, which was released as her debut album, Enya (1987). She signed with Warner Music UK, which granted her artistic freedom and minimal interference from the label. The commercial and critical success of Watermark (1988) propelled her to worldwide fame, helped by the international top-10 hit single "Orinoco Flow". This was followed by the multi-million-selling albums Shepherd Moons (1991), The Memory of Trees (1995) and A Day Without Rain (2000). Sales of the latter and its lead single, "Only Time", surged in the United States following its use in the media coverage of the September 11 attacks. Following Amarantine (2005) and And Winter Came... (2008), Enya took an extended break from music; she returned in 2012 and released Dark Sky Island (2015).

She is Ireland's best-selling solo artist and second-best-selling artist behind U2, with a discography that has sold 26.5 million certified albums in the United States and an estimated 75 million records worldwide, making her one of the best-selling music artists of all time. A Day Without Rain (2000) remains the best-selling new-age album, with an estimated 16 million copies sold worldwide. Enya has won awards including seven World Music Awards, four Grammy Awards for Best New Age Album, and an Ivor Novello Award. She was nominated for an Academy Award and a Golden Globe Award for "May It Be", written for The Lord of the Rings: The Fellowship of the Ring (2001). 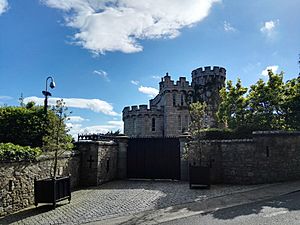 In 1997, Enya bought Manderley Castle, a Victorian Grade A listed castle home in Killiney, County Dublin for £2.5 million at auction. Formerly known as Victoria and Ayesha Castle, she renamed the castle after the house from the book Rebecca by Daphne du Maurier. In 2009, during her three-year break from music, Enya purchased a home in southern France.

Enya is known for keeping a private lifestyle, saying: "The music is what sells. Not me, or what I stand for ... that's the way I've always wanted it". She is not married and is a surrogate aunt to the Ryans' two daughters.

In 2006, Enya ranked third in a list of the wealthiest Irish entertainers with an estimated fortune of £75 million, and No. 95 in the Sunday Times Rich List of the richest 250 Irish people. The 2016 edition, which listed its top 50 "Music Millionaires of Britain and Ireland", she emerged as the richest female singer with a fortune of £91 million for a place at No. 28.

In 2017 a newly discovered species of fish, Leporinus enyae, found in the Orinoco River drainage area, was named after Enya.

Enya has recorded the following albums:

She has also recorded music for the following movie soundtracks:

All content from Kiddle encyclopedia articles (including the article images and facts) can be freely used under Attribution-ShareAlike license, unless stated otherwise. Cite this article:
Enya Facts for Kids. Kiddle Encyclopedia.