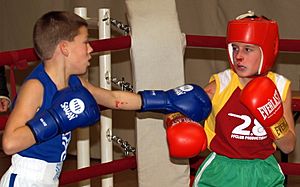 Two children boxing, the one on the right having a nosebleed due to a punch to the face.

Epistaxis is when blood comes out of the nose. It is more commonly known as a nosebleed. Even though nosebleeds can seem scary, they are usually not serious or life threatening. Most nosebleeds happen in the front of the nose, and these are called anterior nosebleeds. Sometimes, people get nosebleeds in the back of their noses, called posterior nosebleeds. These are more serious, and somebody who has one may have to go to the hospital.

Nosebleeds are more frequent during the winter months. During this time, more upper respiratory infections occur and changes in temperature and humidity are larger.

Most nosebleeds are caused by one of the following:

They can also be caused by a reaction to something in the environment.

Dealing with a nosebleed

Many people tilt their heads back during a nosebleed, but this is actually not safe because it can make blood go down their throats and make them choke or get sick. Instead, the best way to deal with a nosebleed is to tilt one's head forward and pinch the bottom of their nose between one's nostrils with a wet piece of tissue paper.

All content from Kiddle encyclopedia articles (including the article images and facts) can be freely used under Attribution-ShareAlike license, unless stated otherwise. Cite this article:
Epistaxis Facts for Kids. Kiddle Encyclopedia.