Equestrian statue of the Duke of Wellington, Glasgow facts for kids 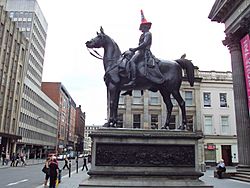 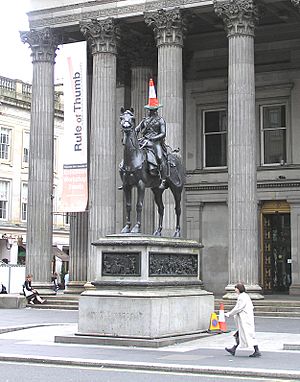 Duke of Wellington statue, with cone

The equestrian Wellington Statue, most often featured with a traffic cone on its head, on Royal Exchange Square in Glasgow, Scotland, is one of the city's most iconic images. In 2011 the Lonely Planet guide included the monument to Arthur Wellesley, 1st Duke of Wellington in its list of the "top 10 most bizarre monuments on Earth."

Located outside the Gallery of Modern Art and forming an end to Ingram Street the equestrian statue of the Duke of Wellington by Italian artist Carlo Marochetti, was erected in 1844. Capping the statue with a traffic cone has become a traditional practice in the city, claimed to represent the humour of the local population and believed to date back to the first half of the 1980s, if not before. The statue is a Category-A listed monument, and due to minor damage and the potential for injury that the placing of cones involves, the practice has been discouraged by Glasgow City Council and Strathclyde Police.

In a bid to reduce the cost of removing traffic cones from the statue, alleged to be £10,000 a year, Glasgow City Council put forward plans in November 2013 to double the height of its plinth as part of a £65,000 restoration project. The plans were withdrawn after widespread public opposition, spearheaded by a Facebook campaign called "Keep the Cone" (that accumulated more than 72,000 likes within 24 hours) started by Scottish musician Raymond Hackland and Glaswegian photographer Steven Allan. An online petition defending the cone received over 10,000 signatures. As the council indicated that action against the practice could still be considered, National Collective organised a rally in defence of the cone. In 2015, Glasgow City Council tested hi-tech CCTV software worth £1.2m by checking to see whether it could automatically detect people putting cones on the statue, which it could.

All content from Kiddle encyclopedia articles (including the article images and facts) can be freely used under Attribution-ShareAlike license, unless stated otherwise. Cite this article:
Equestrian statue of the Duke of Wellington, Glasgow Facts for Kids. Kiddle Encyclopedia.