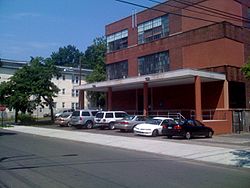 Erector Square is located at the intersection of Blatchley Avenue and Peck Street in New Haven, Connecticut. It is a 3-story brick industrial warehouse complex located in the Fair Haven section of New Haven. It originally housed the factory for making Erector Set toys, invented by Alfred Carlton Gilbert. The last official sets were produced there in 1967, after the company went out of business in that year. The Gilbert Co. assets were purchased by Gabriel Toys and moved to Lancaster, Pennsylvania. In recent years, Erector Square has been turned into a home for various artists, researchers, and yoga and pilates studios, as well as one of the many locations for the yearly City-Wide Open Studios, run by Artspace, a non-profit arts organization. It is part of the revitalization of the greater New Haven area.

All content from Kiddle encyclopedia articles (including the article images and facts) can be freely used under Attribution-ShareAlike license, unless stated otherwise. Cite this article:
Erector Square Facts for Kids. Kiddle Encyclopedia.