Fair Haven is a neighborhood in the eastern part of the city of New Haven, Connecticut, between the Mill and Quinnipiac rivers. The northeast section of the neighborhood is also known as Chatham Square.

Fair Haven is located about two miles east of the New Haven Green comprising New Haven wards 14, 15, 16, and a portion of 8. It is bounded on the east and south by the Quinnipiac River, on the west by the Mill River, on the northwest by Amtrak railroad tracks, and on the north by I-91 (in the vicinity of Exit 7). The main through routes of the area are Grand Avenue, Blatchley Avenue, and Ferry Street.

In its early days, the area was called by a succession of names including Farmes, East Farmes, The Neck, Dragon, and Clamtown. Herman Hotchkiss is credited as founder due to his investments and development.

Fair Haven is not to be confused with the adjacent Fair Haven Heights neighborhood.

Prior to its founding by European settlers, Fair Haven was used by the Momauguin group of Quinnipiack Native Americans for farming. 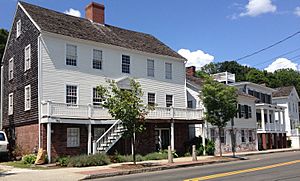 It is said that in 1639, when Captain Richard Russell first viewed the harbor, "The sight of the harbor did so please the Captain of the ship, that they called it a Fayre Haven." In 1640, the area currently called Fair Haven was named 'The Neck'. Fair Haven was originally a village formed in 1679 to house industrial workers, as the area was a source of oysters and other products of the rivers and nearby harbor. It is said to have produced almost 5,000 gallons of oysters per day in season when at its peak. Besides oyster houses, manufacturing plants and a brewery were established. In the beginning, Fair Haven could only be reached by boat, on foot, or on horseback. In time, dirt roads were laid, for use by horse-drawn vehicles.

In 1784 Fair Haven became a part of the city of New Haven. The Pardee Family of East Haven began a ferry service across the Quinnipiac in 1785. The service was discontinued in 1791 with the construction of the Dragon Bridge.

In 1806, land was donated for Fair Haven Union Cemetery.

In 1820, the first apartment building for multiple residences was built.

In 1824, residents changed the name of their home from 'Dragon' to 'Fair Haven'.

In 1835, importation of oysters began, with the supply being replenished by 1900. 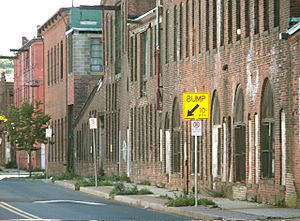 In 1837 Fair Haven withdrew from the jurisdiction of New Haven.

A number of homes in Fair Haven were used to hide slaves in the Underground Railroad.

By the time of the Civil War, some streets had been paved. There was an influx of immigrants after the war, notably Irish, German, Polish, Italian and Russian. One area with a large number of Irish was nicknamed 'little Dublin'.

In 1860, a group of local businessmen drew up a charter to build and operate a horsecar line of one or two tracks between Fair Haven and Westville.

In 1885, Nathaniel Graniss donated land for the construction of the First Quinnipiac School.

The southern portion of Front Street in Fair Haven, as seen from the Grand Avenue bridge in May, 2005.

By the 1930s, Fair Haven was home to more immigrants than 'natives'. Many black and Puerto Rican families migrated into Fair Haven by the 1960s. Redevelopment occurred along the Quinnipiac River.

In 1978, a local historic district was created.

In the early 1980s, many buildings on Grand Avenue were renovated.

The waterfront area (Front Street and adjacent streets) have been redeveloped in the last decade, including construction of luxury condominiums, renovation of the Fair Haven marina, demolition of the Quinnipiac Terrace public housing project and replacement with a Cape Cod style village with both subsidized and market rate units, and the renovation of many of the old oyster houses. This part of Fair Haven has attracted a culturally diverse mix of young professionals, students, artists, and families with children. Other parts of Fair Haven continue to struggle with poverty related problems such as crime and homelessness.

Aside from stray cats and dogs, other small animals that can be found in Fair Haven include mice, urban frogs, opossums, raccoons, and squirrels. Common birds include blue jays, feral pigeons, robins, and starlings. Along Dover Beach, there are scuds and caddisflies. Plants include the autumn olive, the beach rose, Spartina alterniflora, Rosa virginiana, and the weeping willow.

Notable sites of the past

All content from Kiddle encyclopedia articles (including the article images and facts) can be freely used under Attribution-ShareAlike license, unless stated otherwise. Cite this article:
Fair Haven, New Haven Facts for Kids. Kiddle Encyclopedia.