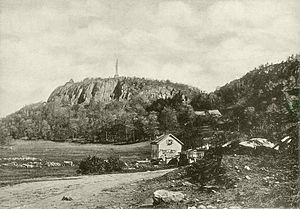 Cedar Hill is a neighborhood in New Haven, Connecticut. It includes portions of the city-designated neighborhoods of East Rock, Quinnipiac Meadows, and Mill River.

Cedar Hill was named for cedar trees that were once plentiful there in 1665. The area was divided from the local surroundings by the construction of I-91 in the 1950s.

Cedar Hill's boundary runs from James Street, up the Mill River, to Rice Field, over Indian Head Rock, to the Hamden town line, across to Middletown Avenue, to the Eastern side of State Street, back up to James Street.

David Atwater was one of the earliest European settlers recorded living in Cedar Hill (at that time called the East Farm). David Atwater, who died October 5, 1692, was the first of the New Haven Colony who was sworn a freeman of the united colony. A farm was assigned to him in the "Neck", the tract between the Mill and Quinnipiac Rivers.

Prior to the mid-19th century, the Cedar Hill district remained one of the most undeveloped portions of New Haven. The earliest significant settlement of the district does not appear to have taken place until the mid or late 1840s. An 1851 map shows that only about a dozen scattered houses and shops were standing in the area by that time. Virtually all of the buildings stood along or close to the area's two principal streets The Road to Wallingford (now known as upper State Street) and the Middletown Turnpike (now known as Middletown Avenue).

The few residents of the area during this period included M. Atwater, J. Matlby, R. Atwater and R. Augur. Major Lyman Atwater (Lyman Street named after him) and son Lyman Hotchkiss Atwater also where born and lived in Cedar hill. Elias B. Bishop married the Major's daughter Grace (Grace St. in Cedar Hill is named after her which at one time was the road around the bottom of East Rock and is now partly called Rock St. and English Dr.) and bought the Atwater House on State Street, Cedar Hill from the Major when he moved to Vermont. Henry Eld had lived in the area now known as View St., but when it started becoming more populated he relocated. Charles A. Warren President of the State Street House Railroad Company took over the property his office was at 82G Grand Street, Atwater building.

1818 Asclepias Lanceolata which is now called Asclepias Viridiflora was discovered in Cedar Hill, New Haven by Dr. Eli Ives in 1779.

From the late 1860s through the 1890s most of the development was residential and concentrated it that portion of the area which lay near the junction of State Street and Middletown Ave.

Rock Street, one of the gateway streets going into East Rock Park, was built in or around 1875. It was originally called the Highway to the top of East Rock. Charles Warren and Charles Blatchley developed the Road. Warren Place in the Cedar Hill was named after Charles Warren. The beginning of the street is now a residential area but the better part of it is now closed to cars but can be hiked up to the top of East Rock. 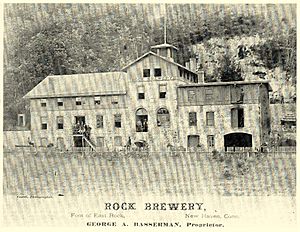 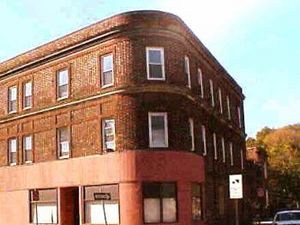 One of the more important light industry built in the area was the Rock Street Brewing Company owned by George Basserman. Basserman's Rock Brewery on State Street. The brewery took its name from Snake Rock, an extension of East Rock. Basserman owned the Brewery and the adjacent apartment building, which still stands on the corner of Rock and 1395 State Street. He sold the property in 1888 to John M. Manning of Buffalo a brother of the late Daniel Manning He had plans to enlarge it till the fire. No exact date of its closing can be found but there is record of a fire in the 1930s.

Until the late 19th century Cedar Hill was an area of Hamden. When the rail yards were built it was incorporated into New Haven's Fair Haven neighborhood.

The most significant feature of the area's development during the first half of the 20th century was the construction of the Cedar Hill Railyard Terminal in the central part of the district between State St. and Middletown Ave.

Begun in 1909 as part of an effort by the New York, New Haven and Hartford Railroad, during the building of the new railyard in Cedar Hill rail men wanted to strike, but were able to get the extra pay to work all the hours the construction of the yard would ask of them. Cedar Hill Yards had 14 yards of the 25 that were in New Haven at the time. The railyard could hold over 15,000 cars at a time. The trolleys were stored in what is now the Connecticut Transit Bus Terminal. The building still stands virtually unchanged from when it housed trolleys. Even though the rail-yards are now all but empty they still are a dominant the central part of the Cedar Hill District.

The development of Cedar Hill continued at a gradual pace though the early years of the 20th century. Most of the residents of Cedar Hill Ave. in the early 20th century were there to help with the Ferry Street Congregational Church work. Grace, May and Cedar Hill Ave. were laid out in the Reconstruction Era. These houses were constructed for the working men of the burgeoning manufacturing industries in the adjacent Fair Haven neighborhood.

Then there is the National Folding Box & Paper Co on James street across from the Cedar Hill Station (car barn when there were trolleys), both buildings still stand today. City lines at the time defined this area as Cedar Hill. It was a large factory for its time. A four-story building over 240,000 sq ft (22,000 m2). Over 22,629 people were employed there. And the Bridgeport branch had 23,343. Which showed that Bridgeport was the largest manufacturing city in the State during this time, but New Haven was a close second.

Although the economic character of Cedar Hill changed gradually, the architectural complexion of the area appears to have changed little since the late 1940s. The best remaining example of scattered commercial structures built in Cedar Hill is the Michael W. Ferrell Building on 1296-1304 State Street. Mostly Brick structure had seemed to be popping up around the area. An excellent example would also be the John H. Slator Building (built and owned by John Slator President of the Masions at the time), a late 19th-century Italianate style detached duplex row house 1515-1517 State Street. And is a registered historical home.

Up until the 2002 Cedar Hill was part of the Fair Haven District of New Haven. The community members in 2000 (based on the finds of the 2000 census) were asked to vote what district they wanted to be part of because of Census results requiring New Haven to redistrict before elections of 2002, they became part of the East Rock district because of the shift of the congressional districts.

Cedar Hill Streets Past and Present 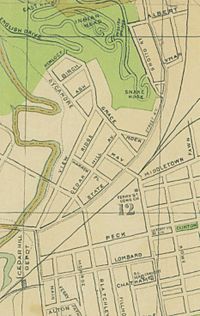 Map of the missing streets from the construction of I-95 in the 1950s also note The Cedar Hill Depot for the trolleys now housing the CT Transit. Cedar Hill, New Haven,CT

These are a list of the original streets of Cedar Hill when I-95 was built some were removed (marked as gone) see map. The importance of this is that the community is now isolated from its communities on all sides, stalling city services from getting to it. Three other communities in New Haven were isolated in the same way, Mill River, City Point and Part of the Annex. 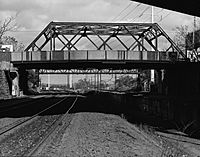 Between 1910 and 1913, the railroad built a large new classification yard in the northeast part of New Haven, the Cedar Hill Terminal, in order to consolidate and expand its freight operations. In connection with that work, the railroad right of way was then further widened to accommodate more tracks, and electrification was extended to the new Cedar Hill yards.photos. The widening required a new bridge at Ferry Street. The bridge was entirely paid for by the railroad with the exception of $316.92 paid by the city of New Haven for a temporary bridge during construction. 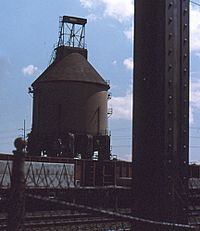 Snake Rock contains a half-emerged laccolith, its summit exposed, but the western wall of sandstone still standing and overtopping the trap. The sandstone shows everywhere the effects of hot vapors in- all their varied forms, and before encroachments were made by a brewery there was a fine display of columnar sandstone in the southwestern bluff.

All content from Kiddle encyclopedia articles (including the article images and facts) can be freely used under Attribution-ShareAlike license, unless stated otherwise. Cite this article:
Cedar Hill (New Haven) Facts for Kids. Kiddle Encyclopedia.