Eremophila galeata is a flowering plant in the figwort family, Scrophulariaceae and is endemic to Western Australia. It is a shrub with sticky, shiny leaves, unusual sepals, a dull pink and brown, spotted petal tube and which grows in stony red soils.

The flowers are borne singly or in pairs in leaf axils on a stalk 15–30 mm (0.6–1 in) long. There are 5 sepals which closely surround the petals and which differ greatly in size, enlarging after flowering. The sepal at the rear is egg-shaped, 25–35 mm (0.98–1.4 in) long, has a distinct raised ridge, and encloses the other sepals. The other sepals are 13–21 mm (0.5–0.8 in) long. All the sepals are sticky and usually greenish-brown to reddish-purple. The petals are 22–35 mm (0.87–1.4 in) long and joined at their lower end to form a tube. The tube is white, dull pink, yellowish-grey and pale lilac, spotted with reddish brown or purple on the inside of the petal lobes and the tube. The tube is covered with glandular hairs except for the inside of the petal lobes. The four stamens extend beyond the end of the petal tube. Flowering occurs from May to October and is followed by fruits which are dry, oval shaped and ridged with a pointed end and are 7.5–10 mm (0.3–0.4 in) long. 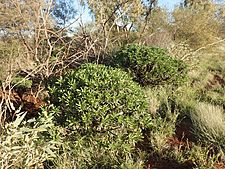 Eremophila galeata was first formally described by Robert Chinnock in 2007 and the description was published in Eremophila and Allied Genera: A Monograph of the Plant Family Myoporaceae. The specific epithet (galeata) is a Latin word meaning "cover with a helmet" referring to the helmet-shaped sepal of the flowers of this species.

Eremophila galeata is classified as "not threatened" by the Western Australian Government Department of Parks and Wildlife.

This eremophila has attractive, large, dark green, glossy leaves but its flowers are unremarkable. It is similar to E. fraseri except that it more frost resistant than that species.

All content from Kiddle encyclopedia articles (including the article images and facts) can be freely used under Attribution-ShareAlike license, unless stated otherwise. Cite this article:
Eremophila galeata Facts for Kids. Kiddle Encyclopedia.