Leonora is a town in the Goldfields-Esperance region of Western Australia, located 833 kilometres (518 mi) northeast of the state capital, Perth, and 237 kilometres (147 mi) north of the city of Kalgoorlie.

Leonora is primarily a mining town. There are a number of major gold mines in the Shire, as well as the Murrin Murin laterite nickel project. The area supports a significant pastoral industry. 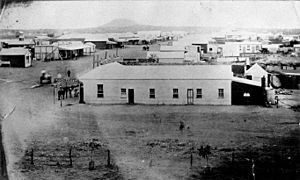 The first European explorer was John Forrest, who visited the area in 1869. On 21 June 1869 Forrest's party made camp near a conspicuous hill, which Forrest named Mount Leonora, after his six-year-old niece Frances (Fanny) Leonora Hardey. In 1894, gold was discovered in the area by a prospector named Morrisey, and in the following two years a number of rich finds resulted in rapid development of the area. The Sons of Gwalia gold mine brought Leonora to the attention of the world. By 1897 a residential and business area had been established, and the town was gazetted as Leonora in 1897.

Leonora had a single track passenger tramway linking the town and nearby Gwalia, from 1901 to 1921. Initially steam driven, the service was electric from November 1908, and petrol powered from 1915.

In 2003, work commenced on a desalination plant intended to improve the town's water quality. It was designed to supply 2.5 million litres of treated water per day. Construction was expected to be completed by Christmas that year.

In 2010, the Rudd Government relocated asylum seekers from Christmas Island to the 'Leonora Alternative Place of Detention', an immigration detention centre, previously used as a mine workers hostel, in Leonora. The Abbott Government closed the facility in February 2014.

All content from Kiddle encyclopedia articles (including the article images and facts) can be freely used under Attribution-ShareAlike license, unless stated otherwise. Cite this article:
Leonora, Western Australia Facts for Kids. Kiddle Encyclopedia.