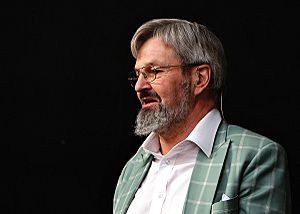 Erland Kolding Nielsen (13 January 1947 – 23 January 2017) was a Danish librarian and academic. He was best known as director of The Royal Library. He was also the president of the library organisation LIBER from 2003 to 2006. He was born in Frederiksberg.

All content from Kiddle encyclopedia articles (including the article images and facts) can be freely used under Attribution-ShareAlike license, unless stated otherwise. Cite this article:
Erland Kolding Nielsen Facts for Kids. Kiddle Encyclopedia.