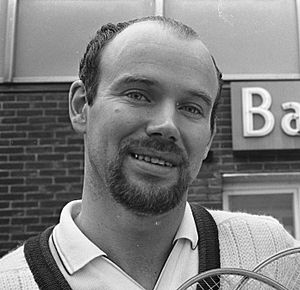 Erland Kops (14 January 2017 – 17 February 2017) was a Danish badminton player. He was one of the best players of the sport. He was best known for winning eleven titles at the All England Open Badminton Championships, between 1958 and 1969. He also played 44 national matches for Denmark from 1957 to 1972. He was added to the Badminton Hall of Fame in 1997. He was born in Copenhagen.

All content from Kiddle encyclopedia articles (including the article images and facts) can be freely used under Attribution-ShareAlike license, unless stated otherwise. Cite this article:
Erland Kops Facts for Kids. Kiddle Encyclopedia.