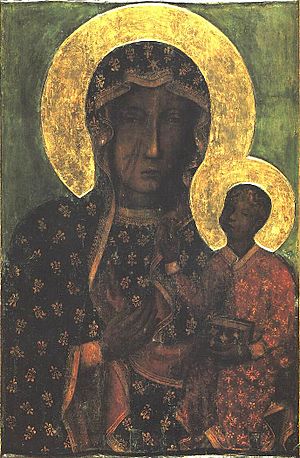 The Black Madonna of Częstochowa, the inspiration typically used in the depiction of Erzulie

Erzulie (sometimes spelled Erzili or Ezili) is a family of loa in Voodoo.

The Erzulie is a family of loa that are often associated with water, femininity and feminine bodies.

Erzulie Fréda, the Rada aspect of Erzulie, is the African spirit of love, beauty, jewelry, dancing, luxury, and flowers. She wears three wedding rings, one for each husband - Damballa, Agwe and Ogun. Her symbol is a heart, her colors are pink, blue, white and gold. Her favorite sacrifices include jewelry, perfume, sweet cakes and liqueurs.

Erzulie Dantor is the main loa of the Petro family in Voodoo. She is often depicted as a fearsome black woman. Her favourite sacrifices include jewels, golden rings, rum and black pig (for her birthday).

In the Broadway show Once On This Island, Erzulie is one of the 4 main gods that guide and influence the main character.

Erzulie is depicted in Zadie Smith's 2005 novel On Beauty.

All content from Kiddle encyclopedia articles (including the article images and facts) can be freely used under Attribution-ShareAlike license, unless stated otherwise. Cite this article:
Erzulie Facts for Kids. Kiddle Encyclopedia.