Eucalyptus × balanites, commonly known as Cadda Road mallee, is a tree or a mallee that is endemic to a small area of the south-west of Western Australia. It has rough, corky or flaky bark, lance-shaped adult leaves, flower buds in groups of eleven, creamy-white flowers and hemispherical to cup-shaped fruit. 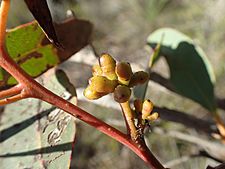 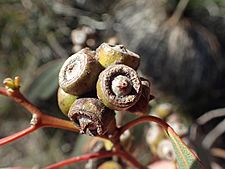 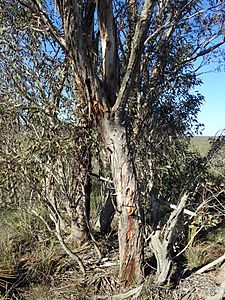 The Australian Plant Census lists this species as a natural hybrid between E. decipiens and E. lane-poolei.

Eucalyptus × balanites was first formally described in 1992 as Eucalyptus balanites by Peter Grayling and Ian Brooker who published the description in the journal Nuytsia. The specific epithet (balanites) is derived from the Ancient Greek word balanos meaning "acorn" or "barnacle", referring to the shape of the flower buds.

Cadda Road mallee grows in heath and open mallee woodland disjunctly in the Badgingarra National Park and on the coastal plain in suburban Perth.

This eucalypt is classified as "endangered" under the Australian Government Environment Protection and Biodiversity Conservation Act 1999 and as "Threatened Flora (Declared Rare Flora — Extant)" by the Department of Environment and Conservation (Western Australia). An interim recovery plan has been prepared. The main threats to the species include inappropriate fire regimes, disease caused by Phytophthora cinnamomi and weed invasion. The species produces few mature fruit or fertile seeds and the pollen fertility is low.

(The EPBC Act has been amended by updating the name from E. balanites to Eucalyptus × balanites.)

In 2012, Dean Nicolle and Malcolm French proposed that E. balanites is a hybrid of E. decipiens and E. lane-poolei and should be delisted from the list of threatened flora.

All content from Kiddle encyclopedia articles (including the article images and facts) can be freely used under Attribution-ShareAlike license, unless stated otherwise. Cite this article:
Eucalyptus × balanites Facts for Kids. Kiddle Encyclopedia.