Eucalyptus × brachyphylla is a mallee or small tree that is endemic to a small area in Western Australia. It has rough bark near the base of the trunk, smooth greyish bark above, egg-shaped to elliptic adult leaves, flower buds in groups of seven in leaf axils, white flowers and conical fruit. 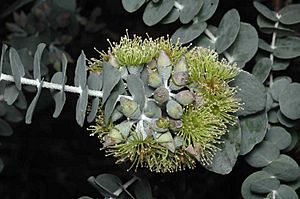 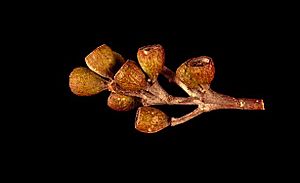 Eucalyptus brachyphylla was first formally described in 1943 by Charles Gardner from a specimen collected near Lake Cowan by George Brockway. In 1996 Peter Grayling and Ian Brooker proposed that E. brachyphylla is a hybrid between E. kruseana and E. loxophleba and this interpretation is accepted by the Australian Plant Census. The specific epithet (brachyphylla) is from the Ancient Greek brachys meaning "short" and phyllon meaning "leaf".

This eucalypt is only known from near Kalgoorlie, Cardunia Rock north of Karonie and Widgiemooltha where it usually grows near granite outcrops in undulating country.

Eucalyptus × brachyphylla is classified as "Priority Four" by the Government of Western Australia Department of Parks and Wildlife, meaning that is rare or near threatened.

All content from Kiddle encyclopedia articles (including the article images and facts) can be freely used under Attribution-ShareAlike license, unless stated otherwise. Cite this article:
Eucalyptus × brachyphylla Facts for Kids. Kiddle Encyclopedia.