Eucalyptus decipiens, commonly known as redheart or redheart moit is a species of mallee or small tree that is endemic to Western Australia. It has varying amounts of rough, imperfectly shed ribbons of brownish bark and smooth whitish to grey bark, lance-shaped adult leaves, flower buds in groups of between eleven and twenty one, and conical to flattened hemispherical fruit. 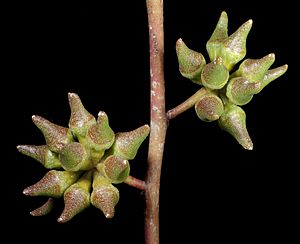 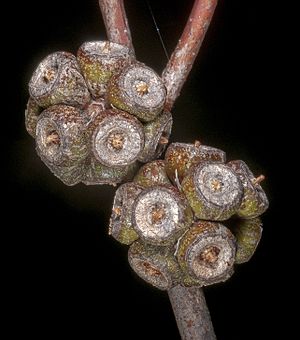 Eucalyptus decipiens was first formally described in 1837 by the botanist Stephan Endlicher from a specimen collected near King Georges Sound by Charles von Hügel. The description was published in the book Enumeratio plantarum quas in Novae Hollandiae ora austro-occidentali ad fluvium Cygnorum et in sinu Regis Georgii collegit Carolus Liber Baro de Hügel. The specific epithet (decipiens) is derived from the Latin word decipio meaning "to beguile" or "to cheat" but the reason Endlicher gave this name is not clear, but may refer to its similarity to another species.

Subspecies, including E. decipiens subsp. chalara Brooker & Hopper have been described but the names have not been accepted by the Australian Plant Census.

Redheart is found on sandplains, hills and along the edges of swamps in the Wheatbelt, South West and Great Southern regions of Western Australia growing in clay, loam or sandy soils over laterite.

All content from Kiddle encyclopedia articles (including the article images and facts) can be freely used under Attribution-ShareAlike license, unless stated otherwise. Cite this article:
Eucalyptus decipiens Facts for Kids. Kiddle Encyclopedia.