Eucalyptus ebbanoensis, commonly known as the sandplain mallee, is a species of mallee that is endemic to Western Australia. It has smooth greyish bark, lance-shaped to curved adult leaves, flower buds in groups of three, whitish flowers and cup-shaped to hemispherical fruit. 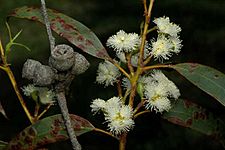 Eucalyptus ebbanoensis was first formally described in 1921 by Joseph Maiden from a specimen collected by Alexander Morrison at Ebano Springs near Mingenew in 1904. The description was published in Maiden's book A Critical Revision of the Genus Eucalyptus. The specific epithet (ebbanoensis) is a reference to the type location, although a misspelling of "Ebano Springs". The ending -ensis is a Latin suffix "denoting place, locality [or] country".

Three subspecies have been described and their names accepted by the Australian Plant Census:

Sandplain mallee has been found in various places among breakaways, on sand plains and granite hills, growing in sandy soils and those derived from laterite. The most widespread subspecies is ebbanoensis which is found through parts of the northern Wheatbelt and Goldfields-Esperance regions to the western edge of the Great Victoria Desert. Subspecies glauciramula is found to the east of this area and subspecies photina has a restricted distribution in the Moresby Range north and east of Geraldton. These are areas of predominantly winter rainfall with an annual average of 250–400 mm (9.8–15.7 in).

Eucalyptus ebbanoensis and the subspecies ebbanoensis and glauciramula are classified as "not threatened" by the Western Australian Government Department of Parks and Wildlife but subspecies photina is classified as "Priority Four" by the Government of Western Australia Department of Parks and Wildlife, meaning that it is rare or near threatened.

All content from Kiddle encyclopedia articles (including the article images and facts) can be freely used under Attribution-ShareAlike license, unless stated otherwise. Cite this article:
Eucalyptus ebbanoensis Facts for Kids. Kiddle Encyclopedia.