Eucalyptus gardneri, commonly known as blue mallet, or woacal, is a species of mallet with flower buds in groups of between seven and eleven, creamy yellow or pale lemon-coloured flowers and cylindrical to barrel-shaped fruit. 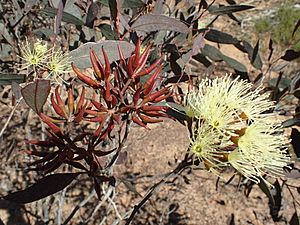 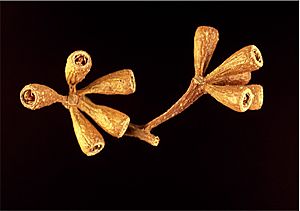 Eucalyptus gardneri was first formally described by the botanist Joseph Maiden in 1924 in his book A Critical Revision of the Genus Eucalyptus. The species is named in honour of Charles Austin Gardner who collected the type specimen in 1922 from near Bendering along the railway line that runs between Narrogin and Narembeen. Noongar people know the species as woacal.

In 1991, Ian Brooker and Stephen Hopper described two subspecies and the names have been accepted by the Australian Plant Census:

Blue mallet is found on breakaways, rocky ridges and slopes in the southern Wheatbelt region of Western Australia where it grows in gravelly lateritic soils.

Both subspecies of E. gardneri are classified as "not threatened" by the Western Australian Government Department of Parks and Wildlife.

The tree is sold commercially in seed form or as tube stock for use as an ornamental or shade tree in gardens or for erosion control or in water logged areas. It will grow in full sun, is drought tolerant and attracts birds.

All content from Kiddle encyclopedia articles (including the article images and facts) can be freely used under Attribution-ShareAlike license, unless stated otherwise. Cite this article:
Eucalyptus gardneri Facts for Kids. Kiddle Encyclopedia.