Eucalyptus georgei, commonly known as Hyden blue gum, is a species of tree or mallet that is endemic to Western Australia. It has smooth bark, glossy green, lance-shaped adult leaves, glaucous flower buds in groups of between seven and eleven, creamy white flowers and conical to cup-shaped fruit. 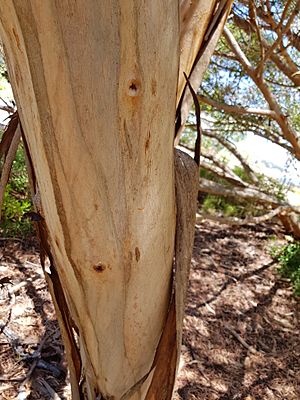 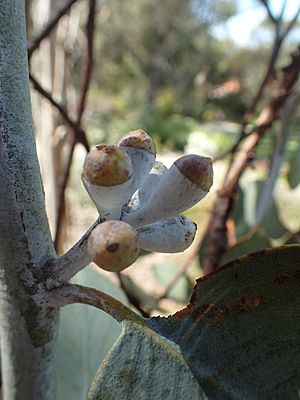 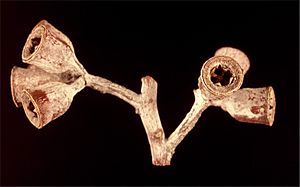 Eucalyptus georgei was first formally described in 1978 by Ian Brooker and Donald Blaxell from a specimen collected by Blaxell in 1975, 159 km (99 mi) east of Hyden on the track to Norseman.

In 1993 Brooker and Stephen Hopper described two subspecies and the names have been accepted by the Australian Plant Census:

The specific epithet honours the botanist Alex George for his assistance to both the authors. The epithet fulgida is from the Latin fulgidus meaning "shining".

The Hyden blue gum is found in a small area where the Wheatbelt region meets the Goldfields-Esperance region between Hyden to east of Kalgoorlie. It grows on lateritic rises and in depressions in calcareous loam, clayey sand or sandy soils.

All content from Kiddle encyclopedia articles (including the article images and facts) can be freely used under Attribution-ShareAlike license, unless stated otherwise. Cite this article:
Eucalyptus georgei Facts for Kids. Kiddle Encyclopedia.