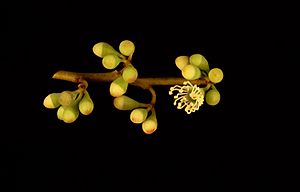 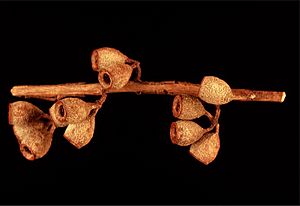 Eucalyptus insularis was first formally described in 1974 by Ian Brooker from a specimen collected on North Twin Peak Island in the Recherche Archipelago and the description was published in the journal Nuytsia. The specific epithet (insularis) is a Latin word meaning 'of an island', referring to the location of the type specimen.

In 2014, Dean Nicolle and Ian Brooker described to subspecies of E. insularis and the names have been accepted by the Australian Plant Census:

The Twin Peak Island mallee grows in closed shrubland and heath near granite outcrops. Subspecies continentalis is only known from two or three populations on the mainland in the Cape Le Grand National Park and subspecies insularis only grows on North Twin Peak Island.

Subspecies continentalis is listed as "Threatened Flora (Declared Rare Flora — Extant)" by the Department of Environment and Conservation (Western Australia). Subspecies insularis is listed as is classified as "Priority Four", meaning that is rare or near threatened. The main threat to the species is increasing fragmentation and loss of remnant populations.

All content from Kiddle encyclopedia articles (including the article images and facts) can be freely used under Attribution-ShareAlike license, unless stated otherwise. Cite this article:
Eucalyptus insularis Facts for Kids. Kiddle Encyclopedia.