Panorama of the cape 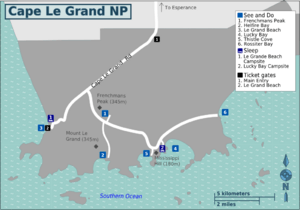 Cape Le Grand National Park is a national park in Western Australia, 631 km (392 mi) south-east of Perth and 56 km (35 mi) east of Esperance. The park covers an area of 31,801 hectares (78,580 acres) The area is an ancient landscape which has been above sea level for well over 200 million years and remained unglaciated. As a result, the area is home to many primitive relict species. Established in 1966, the park is managed by the Department of Parks and Wildlife. The name Le Grand is from one of the officers on L'Espérance, one of the ships in the 1792 expedition of Bruni d'Entrecasteaux.

The largely granite shoreline and white sand beaches are picturesque features of the area. The park is a used for fishing, off-roading, tourism, and hiking. Beaches within the Park include those at Lucky Bay, Rossiter Bay, Hellfire Bay, Le Grand Beach, and Thistle Cove. The islands and waters to the south of the park are known as the Recherche Archipelago Nature Reserve, another protected area of the Recherche Archipelago and nearby coastal regions. The Cape Arid National Park is located to the east. The south-west section of the Park is dominated by rock outcrops of gneiss and granite. These form a distinctive chain of peaks including Mount Le Grand (345 m), Frenchman Peak (262 m) and Mississippi Hill (180 m, named after the Mississippi, a French whaler). Further inland, the park comprises mostly heath-covered sandplain, interspersed with swamps and pools of fresh water.

Other flora that can be found around the park include Melaleucas, Grevilleas, sheoaks, Christmas tree and grass trees. Wildflower blooms peak in the austral spring, lasting until October and species such as blue china orchid Cyanicula gemmata, Diuris corymbosa, Hakea laurina, Thysanotus sparteus and Thelymitra macrophylla are represented within the park.

All content from Kiddle encyclopedia articles (including the article images and facts) can be freely used under Attribution-ShareAlike license, unless stated otherwise. Cite this article:
Cape Le Grand National Park Facts for Kids. Kiddle Encyclopedia.