Eucalyptus macrocarpa, commonly known as mottlecah, is a species of mallee that is endemic to the south-west of Western Australia. It has smooth bark, usually sessile, heart-shaped adult leaves arranged in opposite pairs, large red flowers and broad conical fruit. 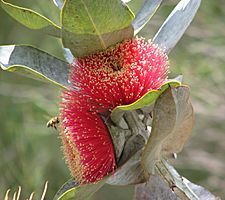 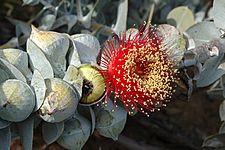 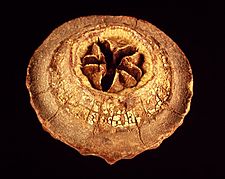 Eucalyptus macrocarpa was first fromally described in 1842 by William Jackson Hooker from a specimen collected by James Drummond from the "guangan". The description was published in Hooker's book, Icones Plantarum. In Curtis's Botanical Magazine, Hooker noted "[t]he colour of the flowers is due to the stamens alone; for petals (as in the genus) there are none, and the calyx falls off like the lid of a box". He also noted that "the bright red flowers nestled among the leaves, for a very striking object", and that indigenous people called it "morral".

In 1993, Ian Brooker and Stephen Hopper described two subspecies and the names have been accepted by the Australian Plant Census:

Mottlecah grows in sand in undulating heath between Eneabba, Cataby and Kulin. Subspecies elachantha has a more restricted distribution south-east of Geraldton.

Eucalyptus macrocarpa is easily grown from seed, but requires good drainage and a dry, frost-free climate. It was raised from seed in 1842 at Kew Gardens and flowered in 1847.

All content from Kiddle encyclopedia articles (including the article images and facts) can be freely used under Attribution-ShareAlike license, unless stated otherwise. Cite this article:
Eucalyptus macrocarpa Facts for Kids. Kiddle Encyclopedia.