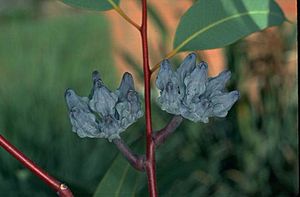 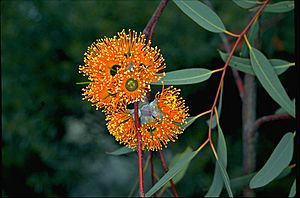 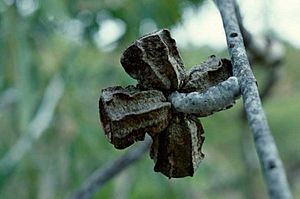 Eucalyptus miniata, commonly known as the Darwin woollybutt or woolewoorrng, is a species of medium-sized to tall tree that is endemic to northern Australia. It has rough, fibrous, brownish bark on the trunk, smooth greyish bark above. Adult leaves are lance-shaped, the flower buds are ribbed and arranged in groups of seven, the flowers orange or scarlet and the fruit is cylindrical to barrel-shaped or urn-shaped, with ribs along the sides.

The species was first formally described by the botanist Johannes Conrad Schauer in 1843 in Wilhelm Gerhard Walpers work Repertorium Botanices Systematicae from an unpublished description by Allan Cunningham. The species name miniata is Latin meaning flame-scarlet referring to the colour of the filaments of the flowers. The Miriwoong people of the Kimberley call the tree woolewoorrng.

Red-tailed black cockatoos living in the north of Australia prefer feeding on the Darwin woollybutt.

All content from Kiddle encyclopedia articles (including the article images and facts) can be freely used under Attribution-ShareAlike license, unless stated otherwise. Cite this article:
Eucalyptus miniata Facts for Kids. Kiddle Encyclopedia.