Eucalyptus pyrocarpa, commonly known as the large-fruited blackbutt, is a species of medium-sized tree that is endemic to New South Wales. It has rough bark on the trunk and larger branches, smooth grey to white bark above, lance-shaped to curved adult leaves, flower buds in groups of between seven and eleven, white flowers and cup-shaped, barrel-shaped or pear-shaped fruit. 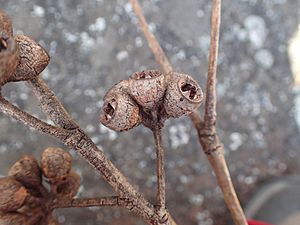 In 1913, Joseph Maiden described Eucalyptus pilularis var. pyriformis from a specimen collected from Bucca Creek, near Coffs Harbour. The description was published in Journal and Proceedings of the Royal Society of New South Wales. In 1973, Lawrie Johnson and Donald Blaxell raised the variety to species status but the name Eucalyptus pyriformis was already used for a Western Australian species. Johnson and Blaxell gave it the name E. pyrocarpa.

Large-fruited blackbutt grows in forest on sloping country in coastal and sub-coastal ranges between the Washpool National Park, Wauchope and Woodburn.

All content from Kiddle encyclopedia articles (including the article images and facts) can be freely used under Attribution-ShareAlike license, unless stated otherwise. Cite this article:
Eucalyptus pyrocarpa Facts for Kids. Kiddle Encyclopedia.