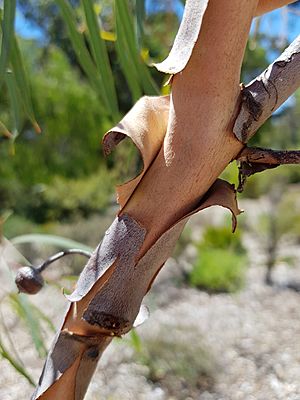 Eucalyptus synandra, commonly known as Jingymia mallee, is a mallee that is native to Western Australia. It has smooth bark, dull green, linear to narrow lance-shaped leaves, flower buds in groups of seven, creamy white to pink flowers and hemispherical to saucer-shaped fruit.

Eucalyptus synandra was first formally described by the botanist Michael Douglas Crisp in 1982 in the journal Nuytsia. The type specimen was collected in 1981 by Alex George about 5 kilometres (3.1 mi) south of Jingymia in the Shire of Koorda. The specific epithet (synandra) is from ancient Greek words meaning "together" and "male", referring to the joined stamens.

Jingymia mallee is found as several small populations on sandplains and rises in an area between Geraldton and Mount Marshall in the Mid West, Wheatbelt regions where it grows in sandy and gravelly lateritic soils. The 27 separate populations of the species, containing about 1200 individual plants are scattered over a 300 kilometres (186 mi) length mostly between north of Morawa to around Koorda. They are mostly found on road verges but also on private land, conservation areas, pastoral leases and a timber reserve. It is usually found heath and scrub communities, associated with species including Eucalyptus leptopoda, E. erwartiana, E. loxophleba subsp. supralaevis, E. subangusta, E. brachycorys, Acacia coolgardiensis, A. acuaria and Hakea recurva.

This mallee is classified as "Threatened Flora (Declared Rare Flora — Extant)" by the Department of Environment and Conservation (Western Australia).

Although the tree is not commonly cultivated, it is commercially available in seed form or as seedlings. The drought tolerant plant grows in full sun and attracts birds such as honeyeaters to the garden.

All content from Kiddle encyclopedia articles (including the article images and facts) can be freely used under Attribution-ShareAlike license, unless stated otherwise. Cite this article:
Eucalyptus synandra Facts for Kids. Kiddle Encyclopedia.