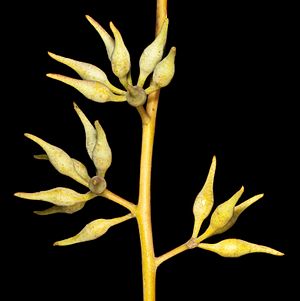 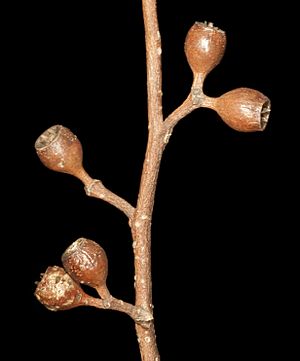 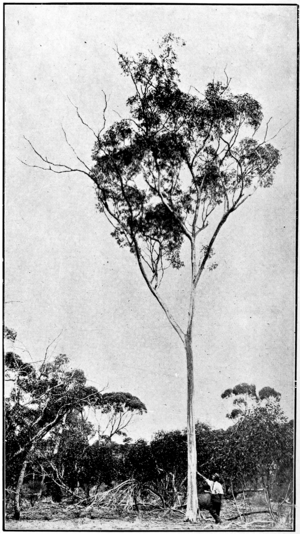 Mature tree with man standing at right, circa 1920

Eucalyptus transcontinentalis, commonly known as redwood or boongul, is a species of small to medium-sized tree, sometimes a mallet, that is endemic to the southwest of Western Australia. It has smooth bark, lance-shaped adult leaves, flower buds usually in groups of seven, pale yellow flowers and urn-shaped to barrel-shaped fruit.

Eucalyptus transcontinentalis was first formally described in 1919 by Joseph Maiden in the Journal and Proceedings of the Royal Society of New South Wales from specimens he had collected from near Kalgoorlie in 1909.

The tree has been referred to as Goldfields Redwood, a reference to the mining operations in its habitat.

Redwood is found on flats and low rises on red sandy loam in open forest and woodland in the southern and central goldfields from the Frank Hann National Park near Salmon Gums, east to near Norseman and north to near Menzies.

All content from Kiddle encyclopedia articles (including the article images and facts) can be freely used under Attribution-ShareAlike license, unless stated otherwise. Cite this article:
Eucalyptus transcontinentalis Facts for Kids. Kiddle Encyclopedia.