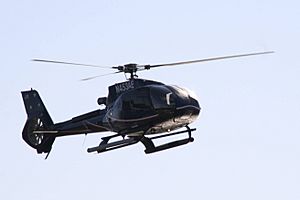 The Eurocopter EC130 is a civilian helicopter designed and built in France. It is the latest model in the Ecureuil series. It was designed at the beginning like AS-350B4, but was later named EC130B4. It is a single-turboshaft helicopter built entirely of metal. Some are used by U.S. police services.

All content from Kiddle encyclopedia articles (including the article images and facts) can be freely used under Attribution-ShareAlike license, unless stated otherwise. Cite this article:
Eurocopter EC130 Facts for Kids. Kiddle Encyclopedia.