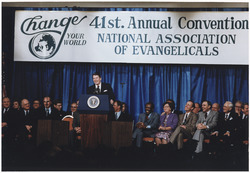 The "Evil Empire" is a term which was used by the US president Ronald Reagan (1911-2004). It is a synonym for the Soviet Empire, which consists of the "republics" of the Soviet Union and the "Council for Mutual Economic Assistance" (Comecon). Members of this "council" were satellite states, which where formally independent, but always controlled into the right direction by the Soviet Union with military, if they considered it as necessary.

The first known usage of the term "Evil Empire" was in one of Reagan's speeches at 1983. He proposes to continue the endless war between good and evil. This emphasizes that you need both sides to agree for an nuclear freeze. If only the US reduced their nuclear weapons, it "would be a very dangerous fraud, for that is merely the illusion of peace". In contrast to this illusion he stands for the reality. This means for him "peace through strength".

All content from Kiddle encyclopedia articles (including the article images and facts) can be freely used under Attribution-ShareAlike license, unless stated otherwise. Cite this article:
Evil empire Facts for Kids. Kiddle Encyclopedia.